As history has proven, men make life’s best and wisest decisions under the heavy influence of alcohol. Hence why so many of them line up at music festivals, such as the Amnesia Rock Festival, to feature in a pornographic video that can potentially be witnessed by all their work colleagues and dirty uncles.

Pamela Kayne with a festival-goer, and boy did he go.

Apparently some of the men get a bit nervous when called to task. Some struggle to cope with all the pressure. They are usually on the other side of the screen with a tub of Vasoline, but for the first time in their lives they are in the video themselves. In the RV you have to have sex with a total stranger as three men with cameras watch on and record your every move. “If someone can’t get or keep it up, we respect that”, added de la Seine. “We don’t laugh at them. I mean, it’s already something that they even showed up. So they leave afterwards, bravo merci.”

This may sound like a fun thing to most of us, but some people have taken offense to the whole idea.

The organisers of the Amnesia Rock Festival, which takes place in Quebec, are anything but happy with the production company and are taking legal action against them. 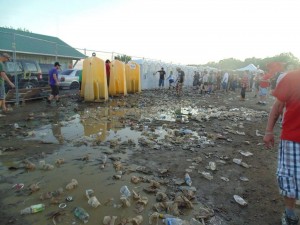 Now Amnesia Rock Fest, in case you didn’t know, or maybe even, if you did know this before, … forgot…, is notorious for being a mess and a cesspool. In 2013 the festival was criticised by it’s attendees for being chaotic and disorganised.

The company won a $250000 court case after they created a parody sex video of the controversial Agent 728 incident in Canada, which had something to do with police brutality there.

The Amnesia Rock Festival 2015 is just around the corner, and this year it will feature acts including Deftones, The Offspring, Rob Zombie, Slayer, Linkin Park, and (holy crap!) System of a Down, among many others. Will AD4X be able to sneak in this year and spread more than just bread? We’ll have to wait and see.